Time for the final results of the Sharesight & Livewire 2017 stock picking competition!

Back in December 2016 we sent the call out for your picks for the 2017 calendar year and have been tracking the performance of the most popular picks from the Sharesight community, the Livewire readership, and some of Australia’s top fund managers throughout 2017.

What were the top picks?

Here are the portfolios for each group, which consist of the 5 stocks that received the most votes:

Who achieved the greatest return on their portfolio as at December 31 2017? The Sharesight clients, the Livewire readers, or the fund managers?

Even though all 3 portfolios owned Altium Limited (ALU.ASX) (which was the stand-out performer with a 66.98% return) and both the Sharesight and Livewire portfolios also owned BHP (BHP.ASX), there was quite a divergence in the performance across the 3 portfolios. The fund managers’ 34.58% return significantly outperformed the Sharesight portfolio at 5.78% – however both the Livewire and fund manager portfolios beat the benchmark (STW.ASX) return of 10.40% for 2017.

There’s over a $145k difference over the $500k combined portfolios between the Sharesight and the fund managers’ portfolios – that’s significant:

What explains these return

Retail Food Group had a horror run in 2017 after a number of scandals hit the company, which lead to repeated profit downgrades and saw it languishing at the bottom of the ASX200 index in December.

The top performer across all 3 portfolios was Altium Limited with a 66.98% total return in 2017. 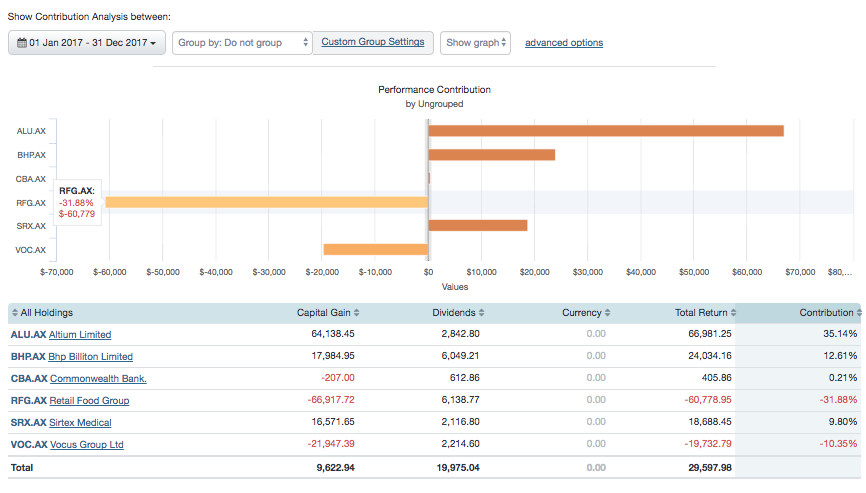 Using the Sharesight Contribution Analysis Report we ran an attribution analysis to determine what happened at the sector level across the consolidated view of all 3 portfolios:

The team at Sharesight would like to congratulate the fund managers on their winning portfolio performance in 2017, followed closely by the Livewire readers’ portfolio which almost doubled the performance of the ASX 200 for 2017.

Stay tuned this year for the Shareight 2018 Stock Picking Competition where Sharesight clients will be battling it out for the top global stock pick for 2018.

All articles in this series