Last year we emailed Sharesight clients asking them to nominate one stock (from select markets) they believed would be the top performer for the 2018 calendar year (January to December). We then constructed a Sharesight portfolio containing the nearly 100 stocks chosen, allocating $10,000 to each in the portfolio.

We’re approaching the halfway point in our 2018 stock picking competition. So six months in, which stocks are in the lead, and which have performed the worst in the competition? 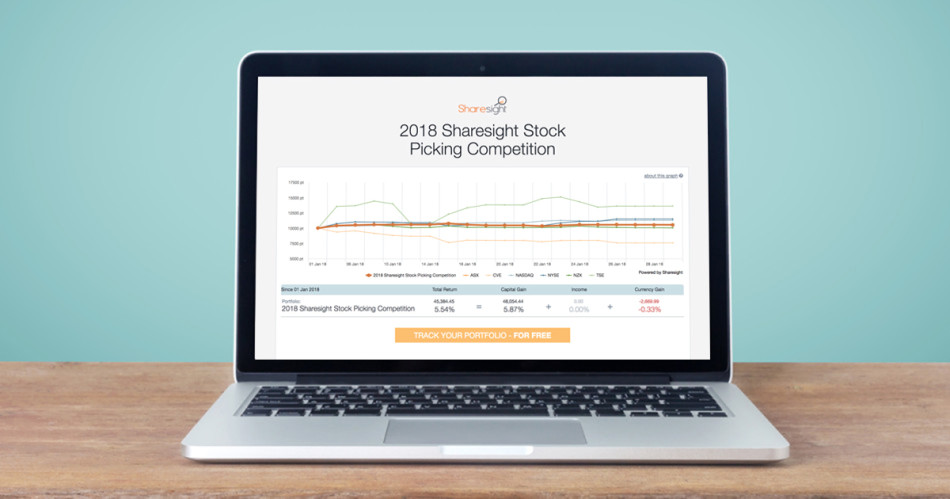 How is the overall portfolio performing?

As at June 19 when our snapshot was taken, the Sharesight stock picking competition portfolio was down 2.9% sliding further from the 1.87% fall during the March snapshot. This contrasts with a 3.14% gain for the ASX200 index (using the STW.AX Spdr 200 Fund ETF as a benchmark). Again, this suggests that individual growth stocks that might be potential winners in a stock picking competition may not be the best to build a portfolio around. 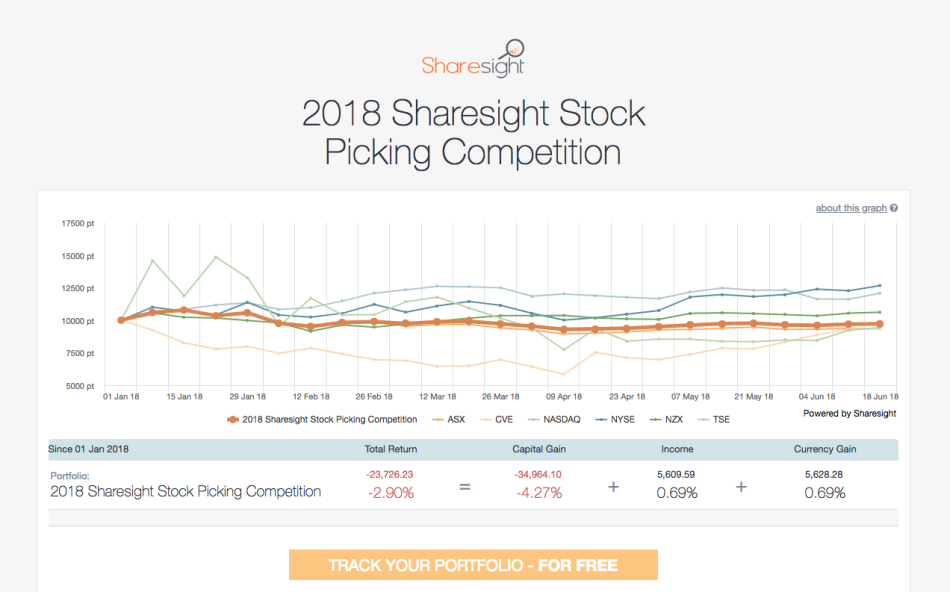 The Australian based stem cell therapy company’s stage 1 clinical trial success has been followed up with news of positive six-month data from cohort A in phase 1. This has pushed their shares higher, up 114.52% for the year.

This Australian based PCB design software company has continued to surge higher throughout 2018. Despite a 7% single day drop in May the stock has returned 79.53% so far this year.

The international provider of high resolution aerial imagery is up 75.53% for the year, with the company reporting a 27% increase in revenue from ordinary activities to $24.4 million for the first half of FY18, and a 31% increase in Annualised Contract Value (ACV) to $54.2 million.

Xero has gone from strength to strength after solely listing on the ASX in February. The shares received a further boost after being included in the ASX100 index in March (replacing Vocus). They’re up 61.06% for the year.

After being up 106.88% and in first place during March, Auscann has slid to ‘only’ being 56.88% up at the halfway point of the year. Regulatory changes by the Australian Government to allow medical cannabis exports have helped keep the shares bouyant. Additionally, their recently announced 1H2018 results were well received.

After being the target of short seller Glaucus in April, Blue Sky’s share price has tumbled significantly, taking out the worst performer crown in our June update with a total return of negative 89.27%.

After buying a ‘strategic equity position’ in blockchain company Brontech in December 2017 (and pushing shares up 42% at the time), the stock has continued to slide from our March update and is now down 85.71% in 2018.

After Retail Food Group’s horror performance in 2017, the fortunes of the company have not improved in 2018. The news in 2018 has continued to worsen, with the announcment of the closure of 200 stores in March, and with the the group’s managing director Andrew Nell stepping aside in May and Richard Hinson appointed CEO, RFG is down 77.13% in 2018.

The Newcastle-based Australian online bookmaker is down 67.5% for the year, despite announcing a $1m capital raise in February to strengthen their ability to meet future cash flow obligations and the acquisition of data feed and bookmaker website DynamicOdds.

We’ve made the 2018 Sharesight stock picking competition portfolio public for anyone to view, removing the need to be logged-in to Sharesight to follow your stock’s performance against all other entries throughout the competition.

Even if you don’t have a stock pick, this is an excellent way to follow the Sharesight competition. Bookmark the 2018 Sharesight stock picking competition public portfolio to check back at any time.