Disclaimer: The below article is for informational purposes only and does not constitute a product recommendation, or taxation or financial advice and should not be relied upon as such. Please consult with your financial adviser or accountant to obtain the correct advice for your situation.

In Australia, when investors sell shares and other listed securities for a price higher than they paid, the profit or capital gain may be subject to a capital gains tax. Capital gains taxes are common globally, but Australia’s implementation is considered one of the world’s most complex, and the nuance in this regulation can have significant implications at tax time. As a result, investors need to understand how their trading activity during the year will impact their capital gains position in their tax return at the end of the financial year.

The amount of tax an investor ultimately pays on their capital gains in Australia depends on a number of factors, which are discussed in this article. This includes whether they are holding shares as an investor or trading shares as business, how long they have owned the shares, their marginal tax rate, and whether they also made capital losses. Broadly, investors need to include all investment income in their tax return. Tax on investment income is set at the investor’s marginal tax rate. This includes what is earned in: 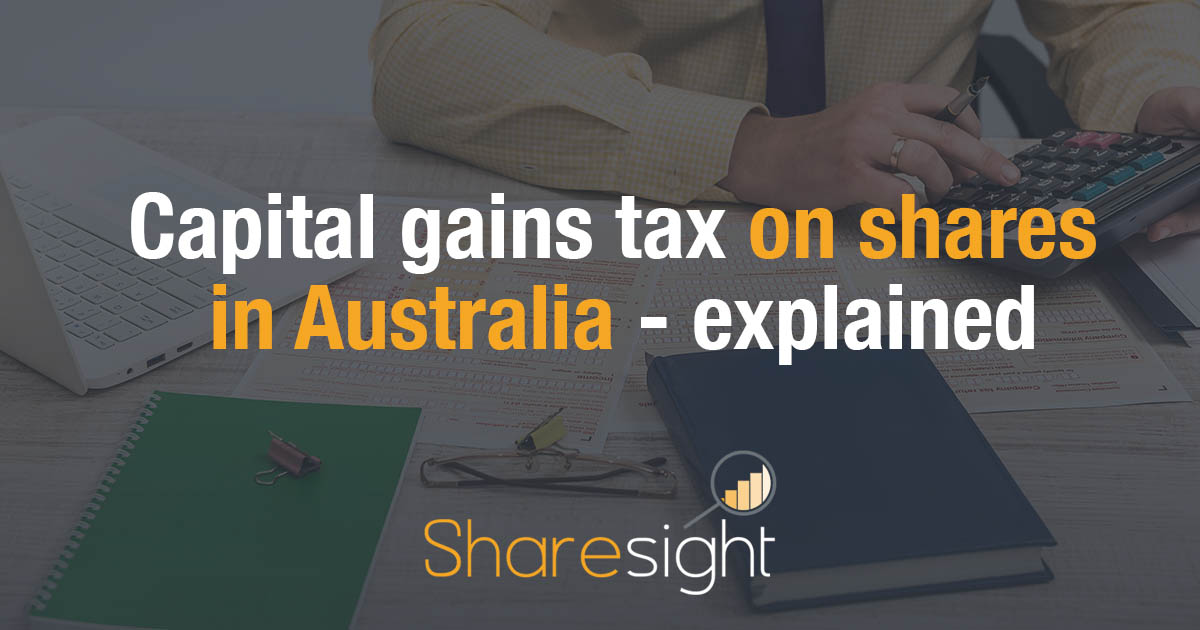 Capital gains or losses on investments in Australia

If an investor sells an investment for more than the cost to acquire it, they have realised a capital gain. This will need to be reported in their annual income tax return. Although it's referred to as capital gains tax (CGT), this is actually part of the income tax regime and not a separate tax.

Because capital gains are added to assessable income and are taxed at the marginal income tax rate, this may increase the tax an investor needs to pay and reduce the net return from investing significantly. As tax is not withheld for capital gains like it is for PAYG employee income, it is a good idea for shareholders to work out how much is likely to be owed on an ongoing basis and set aside sufficient funds to cover this.

Generally investors have to pay tax on any capital gain they make on shares or units when a CGT event occurs, most commonly when an investor chooses to sell shares they own. However, a CGT event is also triggered when the change of ownership of an investment is involuntary.

One example is when a company in which an investor holds shares is acquired by, or merges with another company. This may result in a capital gain or loss. A CGT event may also occur when an investor:

Calculating the cost base of investments for CGT in Australia

When selling part of a shareholding, where investors have bought multiple parcels over time at different prices, several factors need to be considered. Investors will need to be able to identify and nominate exactly when the shares of the holding they’ve sold were purchased to determine the cost base because this will affect the realised capital gain or loss and any CGT discount that applies. The cost base of a CGT asset is generally the cost when bought by the investor, plus certain other costs associated with acquiring, holding and disposing of the asset.

Where an investor can not identify when a bundle of shares were purchased, the ATO allows for a "first in, first out" (FIFO) method and average cost method in certain circumstances.

Cost base using the FIFO method

Using the FIFO method means the sale of stock will be allocated to the shares the investor bought earliest.

The Australian Tax Office will also accept an average cost method to determine the cost of the shares disposed of if:

There are potentially three methods by which Australian investors can calculate their capital gains tax. It helps to be organised and have an exact record of when each shareholding was bought or sold. Here’s how the three methods may be applied.

This method is available to investors if the shares were acquired before 21 September 1999 and they have owned them for 12 months or more before a CGT event. The indexation factor is worked out using the consumer price index (CPI) as a multiplier to account for inflation. This may be an option for investors who are carrying forward any capital losses for assets held before September 1999.

The tax treatment of shares depends on whether the holder is considered to be an investor or carrying on a business as a share trader. The ATO defines a shareholder as a person who holds shares for the purpose of earning income. For a shareholder:

On the other hand, a share trader is defined by the ATO as a person who carries out business activities for the purpose of earning income from buying and selling shares. For a share trader:

Join thousands of Australian investors already using Sharesight to manage their investment portfolios. With Sharesight you can:

Sign up for a FREE Sharesight account and get started tracking your investment performance (and tax) today.