High returns - the market for marijuana

With Canada recently becoming the second country to legalise recreational marijuana, we thought it would be a good time to explore the world of cannabis and the share market.

The debate over the legalisation of cannabis is one that has been raging on for decades. Is it dangerous? *Does it have therapeutic effects? If we make it legal, won’t people just sit around all day and do nothing?

Marijuana has for years, and continues to be, the most widely used recreational drug (outside alcohol/nicotine) in the world. In fact, Australians have the highest rate of cannabis use worldwide! 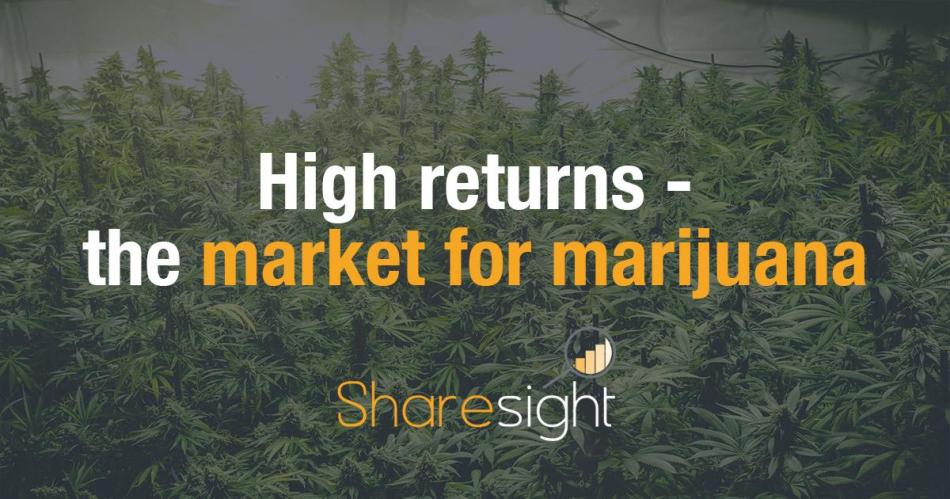 While it is the most commonly-used illicit substance, the stigma of being considered a highly dangerous drug (cannabis was given the same warnings as drugs like LSD) has never been easy to shake off. Attitudes have slowly begun to change, so much so that in addition to Canada and Uruguay, the USA has seen 33 states legalise the use of marijuana, mostly for medicinal purposes, with 10 of those legalising it for recreational use.

With more countries legalising the use of marijuana, inevitably there has been a wave of companies looking to capitalise on the new market opportunities. Marijuana stocks (or more commonly referred to as “weed stocks”) have surged in popularity among investors looking to get a hit of this emerging trend, most notably in Canada and the USA. Investors aren’t only buying weed stocks directly, with the emergence of at least five marijuana based exchange traded funds looking to satisfy investor demand.

Australia looks like it is starting to shake the stigma around marijuana too, with a number of states starting to legalise marijuana for a limited number of medicinal uses. In January, the Australian Government announced it would become the fourth country in the world to legalise medicinal marijuana exports - targeting a $55 billion global market.

Looking to take advantage of this, a number of weed stocks have listed on the ASX, including not only the more well-known companies such as Auscann Group Ltd (AC8.ASX), but also all manner of new firms and existing ASX-listed companies pivoting into the marijuana space.

While the industry, and the legal environment surrounding it, are still in a stage of infancy, this hasn’t stopped some companies (and their investors) seeing massive intraday stock price jumps, or huge short-term gains - often off the back of something as simple as the announcement of a new advisor to their board.

We built a portfolio of 27 ASX-listed companies that are either fully or partially in the marijuana space. Over the last 2 years that portfolio has returned 13.44% p.a. - with most gains seen in the lead up to, and shortly after, the Australian Government announced its changes to marijuana export laws in January 2018. Since then however, the story has not been as rosy, with the reality seemily not living up to the hype.

Within the portfolio there are standout performers like the aforementioned Auscann Group Holdings, with a 189.79% return, and Cann Group (CAN.ASX) returning 142.92%. But on the flip side are companies like Roots Sustainable (ROO.ASX) and Esence Lab Ltd (ESE.ASX) that have returned -74.73% and -48.95% over the last 2 years.

Here’s how the rest of the companies in our theoretical ASX weed stocks portfolio performed over the last two years: 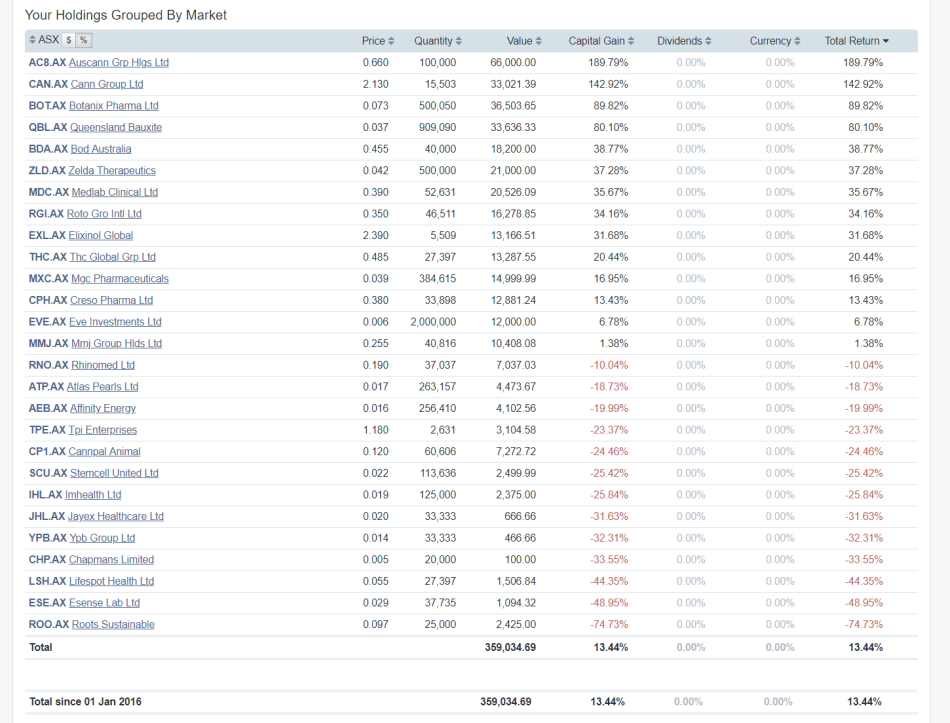 Will the high last?

A lot of the recent talk has centred around whether or not this new sector of the market is in a bubble. Some commentators are adamant it is, while others stress that conditions will calm as investors begin to weed out companies that are just trying to ride the high. Among the rush of companies in the space just looking to jump on this emerging trend, there are a growing number of who are developing products and therapies, helping this field and industry grow. These are the companies that will persevere, once the initial high wears off.

Track your weed stocks with Sharesight

Are you a weed stock investor? Take advantage of the investment tracking platform used by investors in over 60 countries worldwide, tracking over US $6.1billion in shares, mutual funds and other investments - sign up for a free Sharesight account today and find out your true portfolio performance.