Thematic investing has outlived its originators.

Today thematic investing is sexier. Themes range from specific tech sectors to bets against a particular industry. Thematic strategies go hand-in-hand with ETFs. Investors can trade in and out of them on public markets. One of our partners, Macrovue, curates Vues – themes you can deploy to suit your preferences.

That a manager tracks a particular theme is enough to gather assets.

One of my all time favourites is the Vice Fund (MUTF:VICEX). The folks at Vice run a strategy “across industries with significant barriers to entry including tobacco, alcoholic beverages, gaming, defense, and aerospace industries.”

That innocuous mission statement betrays the fact that their logo is a martini, a bullseye, a pair of tumbling dice, and a lit cigarette. I’m sure the Trump administration is considering Vice as their default pension option. 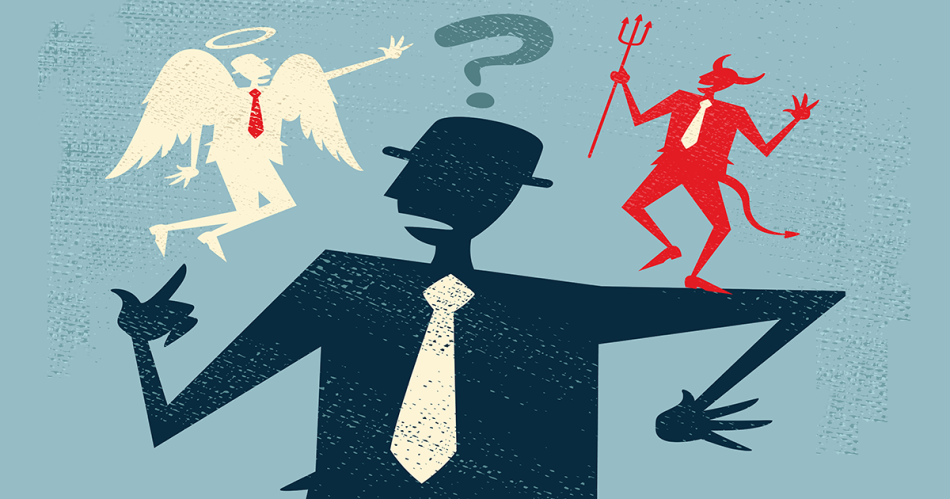 Having been a Vice enthusiast for some time, I began to wonder if Vice had an opposite. If Vice is the devil on one shoulder could there be an angel on the other?

Socially responsible investing (SRI) has grown in popularity, becoming almost synonymous with eco-friendly investing. SRI has been around since the 1990s, mostly with a focus on civil rights, poverty, and even better rights for investors.

But most mainstream SRI funds don’t offer an inverse to the Vice Fund. If vice is defined as immoral or wicked behaviour, the inverse would be a fund that encourages moral and virtuous behaviour.

What righteous earthy body has enough money to run a fund like that?

The Christians. I began researching religious-based mutual funds. Turns out there are a lot of them – Catholic funds, Lutheran funds, evangelical options – a flavour for every denomination.

Amongst the largest by funds under management and with a name to rival the Vice Fund is the Ave Maria Rising Dividend Fund (MUTF:AVEDX). Talk about an awesome marketing visual – dividends rising from the grave, safely collected by George Schwartz and Richard Platte, the fund’s managers in suburban Detroit.

Ave Maria Rising Dividend seeks dividend income and growth through companies that “do not violate the teachings of the Roman Catholic Church.” Not surprisingly their logo features a Gothic-style church window, an open bible and a cross.

Two funds on opposite ends of the moral spectrum. What happens when we compare their portfolios?

Whether you prefer the crusaders of virtue or princes of darkness, both options are steeped in conviction – something you want in such a fund manager. Vice owns just 44 stocks compared to Ave Maria’s 38. The world offers more opportunities to sin I suppose.

Nope. Digging through their latest disclosure documents shows two companies owned by both funds. In such concentrated portfolios with such opposite mandates that’s a huge surprise. What type of company could possibly pass a screening for both vice and virtue?

Vice and Ave Maria both own shares in alcohol giants Diageo and Brown-Forman. Each of the four positions represent over 1% of their total portfolios, which means that Vice and Ave Maria have almost 5% of client money copulating.

Surprisingly Ave Maria takes a particular shine to energy (Exxon, Schlumberger, and Halliburton) whereas Vice… actually Vice does nothing surprising. Every company in their portfolio sells a product that kills you (Philip Morris), kills others (Raytheon), takes your money (Crown Casinos), or starts wars (Lockheed Martin).

Here are the top 10 holdings in each portfolio:

According to Morningstar, $10,000 invested in Ave Maria Rising Dividend would have netted you $2,600 more than the Vice Fund over the last 10 years. That’s redeeming.

While the minimum investment amounts are both modest, the price to sin is 61% higher than to give to the collection plate. This expense ratio difference explains a good chunk of the performance gap.

But how to measure each manager’s true beliefs?

I wanted to measure the performance of each manager’s highest conviction stock picks. To determine, I built each portfolio in Sharesight, but with a twist:

Yes, this approach wreaks of hindsight, but it’s a fun way to pit the angels against the demons.

How did the managers fare based on their conviction picks?

Since the first purchase in 2005, the “Angels” portfolio (Ave Maria Rising Dividend) returned 6.58% annualised, with a 3.05% annualised dividend income. 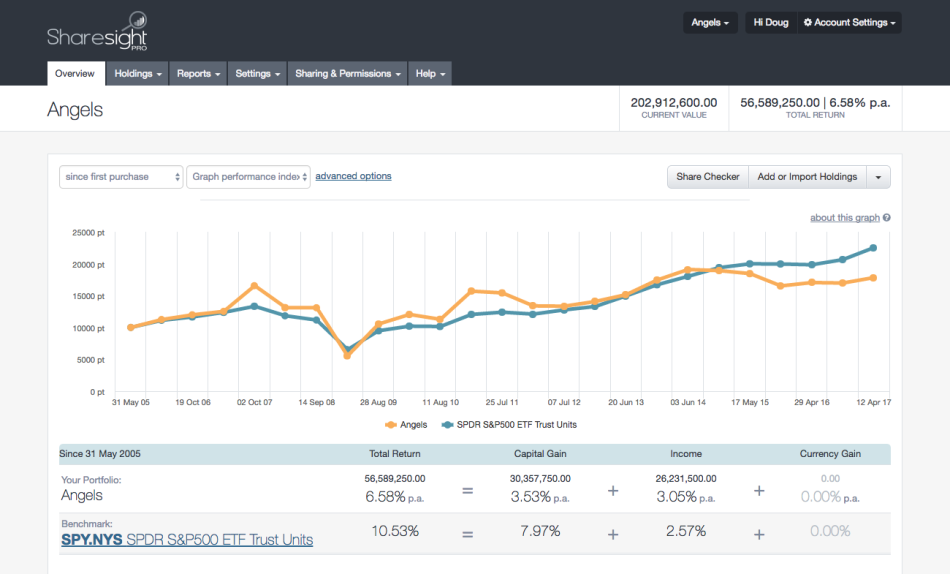 Since the first purchase in 2003, the “Demons” portfolio (Vice Fund) returned 32.31% annualised, with a 7.48% annualised dividend income: 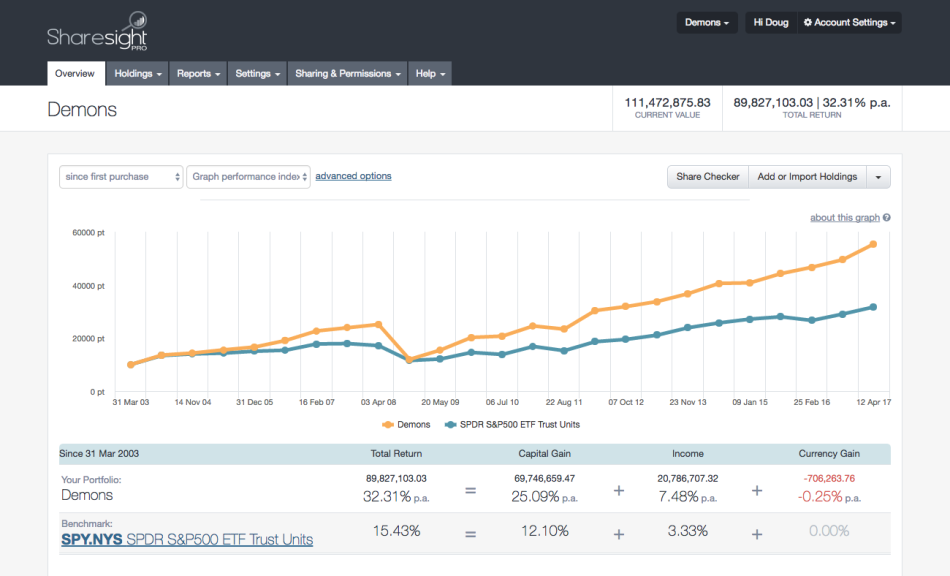 To be fair the Vice Fund has been running for longer (it’s also half the size). Here’s a look at how each fund’s conviction picks compare over the same time periods:

But what explains those returns?

I ran a contribution analysis report in Sharesight to further breakdown Vice’s return profile, with custom groups based on how I’d classify these companies.

Unlike most mortal souls, their commitment to smoking has really kept them going.

64% of the Vice Fund’s 14 year return is attributable to their investment in tobacco companies. This explains why even in 2017 British American Tobacco announced plans to buy Reynolds for $49B. Runner up is their investment in “War,” which explains 26% of their total return.

As for Ave Maria, their return composition is diversified with Emerson Electric and Cisco Systems leading the way. However, even though their portfolio may pass a “Catholic screen,” I was less convinced of their purity.

Based on what I learned in Sunday School, I built another custom group that tags their holdings as “Saints,” “Sinners,” and “Purgatory” for those in between – these companies may have good intentions, but their products seem to wind up in the hands of companies in the Vice portfolio.

Turns out those stranded in Purgatory are the biggest driver of returns, delivering 64% of the fund’s return over 12 years, followed by the Sinners’ 32%.

The Saints returned only 4%.

To Ave Maria’s credit, Emerson Electric, one of their longest held and largest positions has contributed almost 30% to their total return. Unfortunately, Emerson is stuck in Purgatory – their products are used in nuclear submarines and deep sea oil rigs.

Thematic investing is a useful tactic, but it’s wise to know what you’re actually buying and at what price. Ave Maria Rising Dividend investors should be thrilled with the fund’s low price, but might take issue with some of their stock picks. The Vice Fund certainly delivers on its name, but investors pay a high price to sin.