While the team at Sharesight have all been working from home to avoid COVID-19, we’ve been discussing the best investing related movies to watch while we stay inside. Here are 10 top investment related movies as chosen by our team. 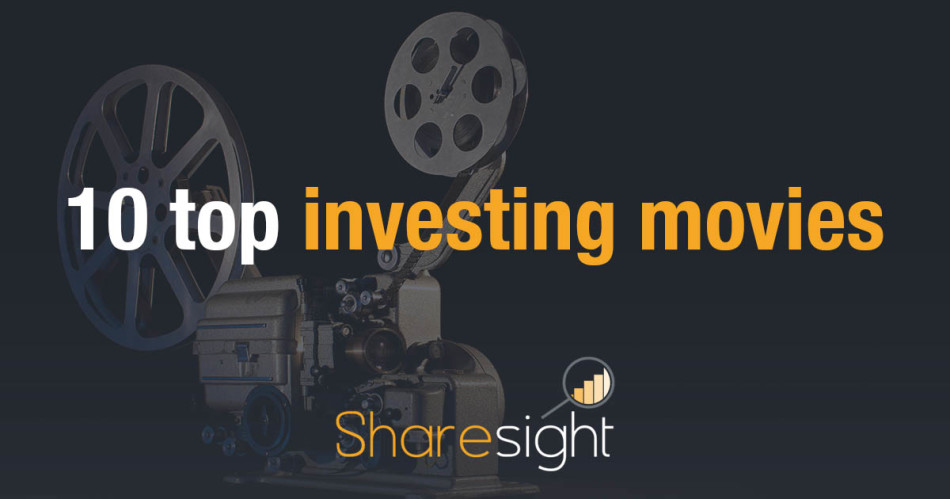 The movie descriptions below have been kept brief, but may contain some spoilers, if this is a concern, you’re best off just finding the movies from the list above on your favourite streaming platform and watching there.

Centred around a 24-hour period at an unnamed Wall St investment bank during the 2008 global financial crisis. Margin Call tells the (fictional) story of key people at that bank, who discover the firm’s mortgage-backed securities to be excessively leveraged – exceeding historical volatility levels.

The group then hatch a plan to liquidate the assets in a fire-sale, dumping them onto the market before others realise the assets are toxic.

Wall Street follows the story of Bud Fox, a young stockbroker working at Jackson Steinem& Co. Bud’s dream is to work with legendary Wall Street broker Gordon Gekko. The young stockbroker calls Gekko’s office 59 days in a row to get an appointment, eventually making a personal visit to Gekko with some contraband cigars.

Impressed with his initiative Gekko gives Bud a chance at his firm, before getting entangled in insider trading activities that attract the interest of the SEC.

Based on the book The Big Short: Inside the Doomsday Machine by Michael Lewis, the movie explores three interrelated stories in the lead up to the 2007 housing market crash.

A modern (well, 1980s) take on Mark Twain’s novel The Prince and the Pauper, Trading Places examines the issue of nature vs nurture when two brothers (Randolph and Mortimer Duke) – owners of a commodities brokerage firm – disagree on the factor that is the most important and decide to place a bet to resolve their dispute.

This bet sees the brothers fire and ostracise one of their commodities brokers (played by Dan Ackroyd) and employ and nurture a ‘street hustler’ (played by Eddit Murphy) at their brokerage firm. The movie follows the fortunes of each character as they come to terms with their new lives.

A documentary that examines the lead up to and subsequent collapse of the Enron Corporation in 2001. Enron was a firm started in 1985 by Kenneth Lay that became entangled in shifty trading activities early on its life, with senior executives repeatedly turning a blind eye to such activities through the firm’s quest to meet or exceed analyst expectations after success during the dot-com bubble.

Increased scrutiny of the firm’s activities in 2001, starting with a 2001 episode of PBS Frontline see the company’s fraud unravel.

Based on the book Barbarians at the Gate: The Fall of RJR Nabisco, this movie tells the story of F. Ross Johnson, CEO of RJR Nabisco, who after learning the firm’s smokeless cigarette product Premier is likely to be a failure, attempts to take the company private in 1988 through a leveraged buyout.

While leaning more towards ‘workplace romantic comedy’, Working Girl follows Tess McGill, a working-class girl who is a secretary in the M&A department of an investment bank. After her manager breaks her leg in a skiing accident, Tess steps up and pushes her idea that one of the firm’s clients, Trask Industries, should pursue mergers in the media space before getting romantically entangled, disentangled, and transforming herself along the way.

Based on the memoir of former stockbroker Jordan Belford, The Wolf of Wall Street is a dark comedy that charts his stockbroking career at Stratton Oakmont, which conducted a range of fraudulent and corrupt activities that he was ultimately convicted for in 1999.

Another film centred around the events leading up to (and the aftermath of) the 2008 global financial crisis, Inside Job is a documentary that begins by telling the story of the deregulation of the financial industry in Iceland in the early 2000s, then explores the international reach of collateralized debt obligations (CDOs), the role ratings agencies played, and the housing boom/bubble that drove the crisis.

Inside Job won the 2010 Academy Award for Best Documentary Feature.

Now this one is a literal curve ball when it comes to talking about investment related movies. Moneyball is a documentary that follows the Oakland Athletics baseball team’s 2002 season. After the team’s loss to the Yankees in 2001, Oakland’s General Manager Billy Beane turned to Yale economics graduate Peter Brand for a fresh approach to rebuild his team.

Billy’s strategy is to turn to Sabermetrics, a statistics driven approach to measuring player performance linked to their on-base percentage, rather than the intuition of player scouts on selecting players to recruit.

The use of Sabermetrics revolutionized the way baseball teams have been run ever since.

Tell us your favourites

Did we miss your favourite ‘investing related’ movie? Let us know which movies you love and why on Twitter, Facebook, or LinkedIn.

If you, like us, are also spending a lot more time inside and looking for content to consume, make sure you check out: