Yesterday we were invited to the launch event of OnMarket BookBuilds at the Bloomberg offices in Sydney. Also lending a hand was none other than Australian Prime Minister Malcolm Turnbull. OnMarket provide a democratic way for investors to place capital with newly-listed companies via their web and mobile platform. This is a good example of technology changing the landscape of financial services.

Outside of a few notable “Dutch auctions” (Google being one), the IPO process is stubbornly old school. Before a company lists, investment bankers shop the company to institutional investors who agree to a (typically discounted) price. The idea being to set the stage for a “pop” once the company lists on the open market. By lining up new capital, coaching a company through the rigours of a public listing, and giving marketing support, investment banks provide value. But this also means that investment banks have access to proprietary information before retail investors and have a better gauge on what the price will do once listed. Also, investment banks aren’t necessarily interested in what happens after a company goes public because they’ve already baked in a nice gain. OnMarket BookBuilds changes this by giving any investor an avenue to participate in the pre-listing “bookbuild” process. 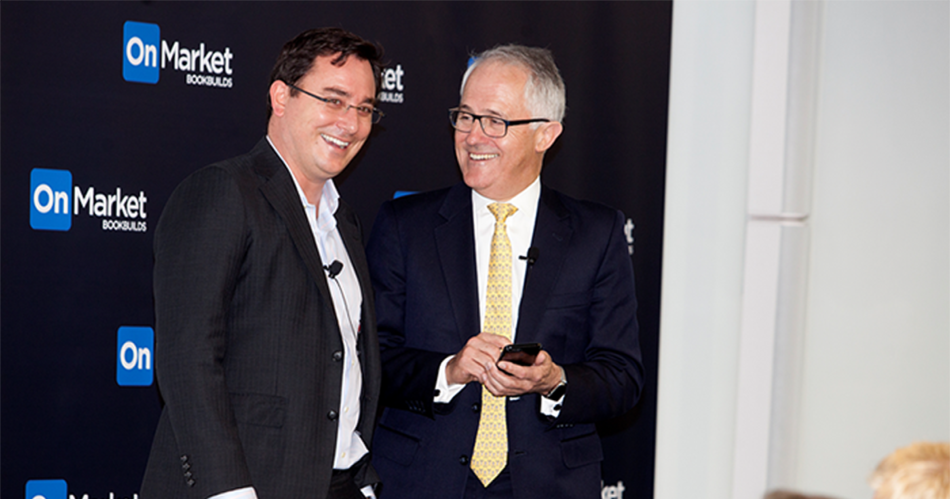 But back to the fact that the Aussie PM was in attendance. After the product launch, he remained on stage to say a few things about the local tech sector. Aside from a few “culture of innovation” talking points, he said a few things that really resonated:

Turnbull said that only those companies with open marketplaces, and open APIs, and not those with walled gardens would survive (interesting that he uttered these words in the Bloomberg office - one of the last, highly successful closed ecosystems). But yes, the Australian Prime Minister actually said “open API” and cited the TripView app as a government-led example. We wholeheartedly agree, which is why we’re investing heavily in our API.

When talking about digitising transactions on government platforms he said to not worry about cost savings today and that investing whatever it takes up front will create cost efficiencies down the track. Agreed here as well. We’ve often said that using Sharesight + Xero, for example, might not be the cheapest solution but it will save time and create efficiencies.

A journalist asked the Prime Minister a very good question: given his background at Goldman Sachs, how did he see OnMarket BookBuilds as potentially disrupting the traditional IPO process described above. He didn’t take the question head on, but said that disruptive technology is welcomed if it can help all investors with price discovery.

Thanks to OnMarket BookBuilds for putting on a terrific event. A great day for Australian fintech.

For more info, check out the event hashtag: #GetOnMarket