What is the Foreign Investment Funds (FIF) Tax in New Zealand?

Disclaimer: This article is for informational purposes only and does not constitute a product recommendation, or taxation or financial advice and should not be relied upon as such. Please consult with your financial adviser or accountant to obtain the correct advice for your situation.

The foreign investment fund (FIF) taxation regime in New Zealand is broadly designed to prevent taxpayers from using investments in offshore entities to avoid or defer their tax obligations. These rules apply to offshore investments held by New Zealand-resident taxpayers and target overseas companies who do not pay dividends.

The tax implications of the FIF regime mean it’s necessary to understand which investments are considered foreign investment funds under the rules, how to calculate FIF income and how it impacts portfolio returns.

Why does NZ have a FIF regime?

In order to diversify their portfolios beyond the opportunities available domestically, many New Zealanders invest in overseas companies or unit trusts.The FIF rules impose a tax on the underlying income that is derived from such investments, both to ensure a fair playing field and to encourage investment in NZ-domiciled companies.

What is a FIF?

While the FIF rules serve as an incentive to invest locally, they largely exempt small foreign investments of less than NZ$50,000.These were first introduced as part of a tax reform package on 1 April 2007 to remove inconsistencies in the old rules. The rules were amended in 2014.

There are also different rules for holdings of 10% or more that may apply. A FIF does not include term deposits, bonds, debentures, money lent, foreign employment, pensions, qualifying foreign private annuity or rental investments.

How is FIF income calculated?

The rules for FIF were at least in part defined by New Zealand legislation before 2007 but reform aimed to simplify the process by introducing the Fair Dividend Rate Method (FDR) and Cost Method (CM). This means that since July 2011, investors need to consider the following five calculation methods depending on their type of foreign investment and information they have available. These are:

Retail investors tend to choose the FDR method as this ensures a flat tax is paid of 5% on the share portfolio’s opening market value each year. The excess return is effectively tax free and generally only shares held at the start of an income year are taken into account, with purchases and sales of shares during the year excluded. However, shares that are purchased and sold in the same income year are taxed on the lower of 5% of their cost or the actual gains made on these "quick sales" - the term for a sale of shares in a company are bought and sold within the same income year.

Investors can also use the Comparative Value (CV) method which determines taxable FIF income from the change in value of the investment each tax year, with an adjustment for capital gains and dividends In some cases it is possible to switch between FDR and CV each year to achieve the best tax outcome.

The claiming of FIF losses has its own set of complexities and is best discussed with a tax agent or financial adviser.

Exemptions to FIF rules in NZ

A full list of exemptions to the FIF rules is contained in the New Zealand Income Tax Act 2007 and these are best discussed with your tax agent or financial adviser as general tax rules will still apply. However, the key exemptions for New Zealand residents to be aware of are:

· an interest in a foreign superannuation scheme acquired while the investor was a resident in New Zealand, or treated as a New Zealand tax resident under a double tax agreement, or

· an interest in a foreign superannuation scheme where the investor complied with the FIF rules for an income year ending before 1 April 2014, returned that income in their income tax returns filed before 20 May 2013 and continue to return the income on that interest in succeeding years.

There are various exemptions from the FIF rules and common pitfalls that can be avoided:

· From 1 April 2014, lump sum withdrawals or transfers from foreign superannuation funds are generally excluded from the FIF rules and will be taxed at time of withdrawal or transfer.

· Generally pension payments are taxable in New Zealand. However, some offshore social security pensions are not required to be returned in New Zealand.

· Some investors are able to calculate their FIF income under the FDR or CV method and they can return annually the lesser of the two. Any losses must be reduced to nil. However, these losses must not be included as part of overseas income.

· For some investments, New Zealanders are not allowed to use the FDR method. These investments are usually called FDR prohibited or CV enforced investments. In such cases income is calculated under the comparative value method for as long as the person owns the investments.

The good news is that investors on a Sharesight NZ Expert or Sharesight NZ Pro plan can run their own FIF tax report in just a few clicks using both the FDR and CV method. Read our guide on using the NZ FIF report to see how easy it is. 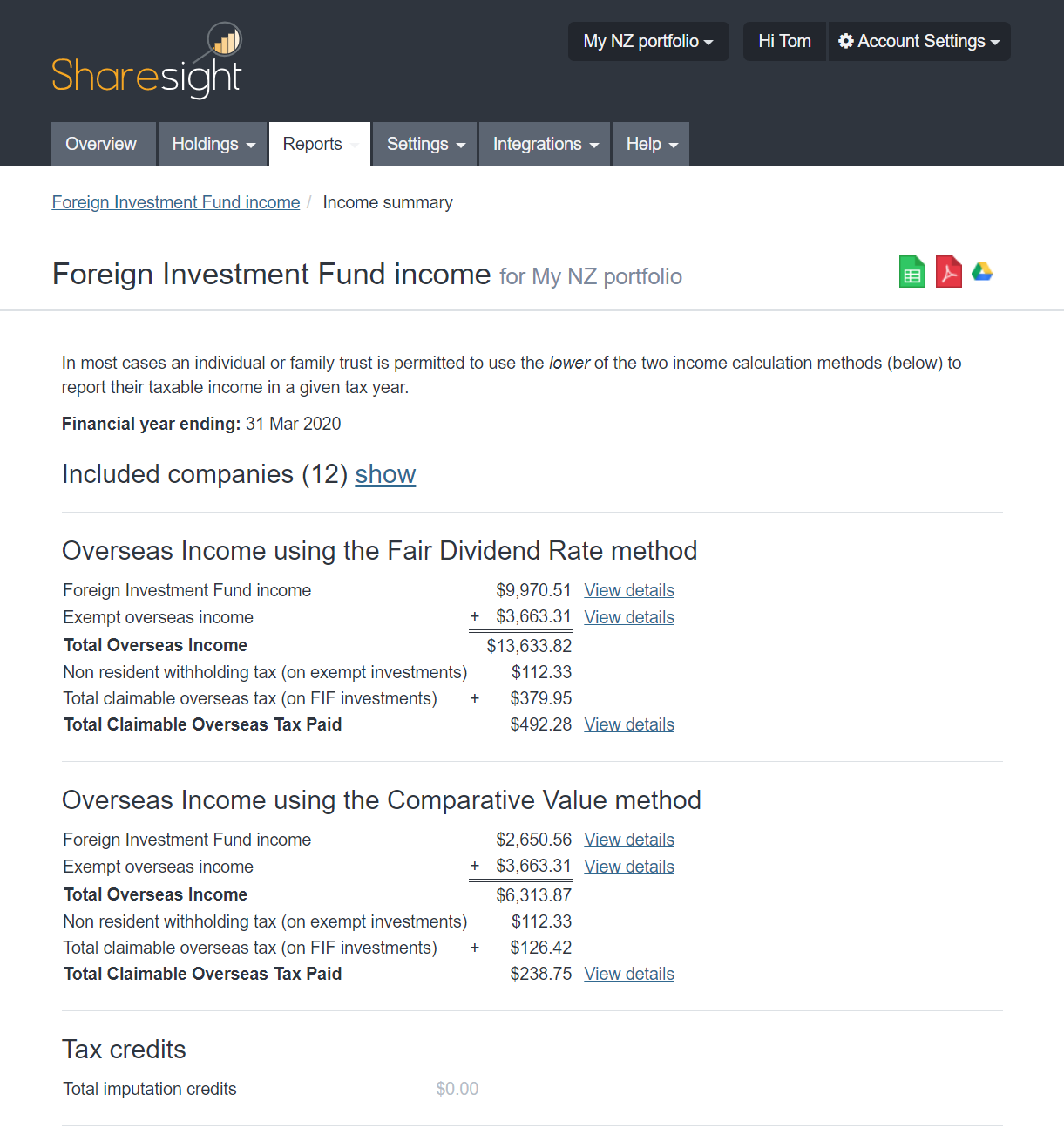 By compiling all your portfolio data in one place, Sharesight eliminates the paper-chase and headaches normally associated with performance and tax reporting.

Plus, if you upgrade your Sharesight subscription may be tax deductible.† Sign up today to get started.

†If you are a New Zealand tax resident and you derive income from the sharemarket, your Sharesight subscription may be tax deductible. Check with your accountant for details.