The following article is republished with the permission of James Cornell, author of the excellent Market Analysis newsletter. As a long time subscriber to Market Analysis I can recommend this monthly newsletter and share recommendation service to all share market investors from beginners to experts. Please visit stockmarket.co.nz for further details and subscription information. – Tony Ryburn, Executive Chairman, Sharesight

Just a year ago we were all being told (probably by people who have never owned a share in their life and with little or no financial net worth) that the Global Financial Crisis (GFC) would lead to another Great Depression worse than the real Great Depression of the 1930’s! Well, that didn’t quite work out as they expected, did it?

Now we have “GFC 2.0” which we are informed will lead to… you guessed it… another Great Depression! We won’t bring up inconvenient facts such as the global economy is actually growing (although not as fast as many people would like).

“GFC 2.0”? Who thinks up these names? It sounds like something that the marketing department of a news organisation would come up with to boost newspaper sales or Financial News TV subscriptions! But seriously, a sequel makes a lot of financial sense. You don’t need to waste money on journalists, just pull up last year’s script, cross out “Lehman Brothers” and “Sub-Prime Debt” and substitute “Greece” and “Sovereign Debt”.

A Banking crisis or a Sovereign Debt crisis have historically happened about five times per decade – about every couple of years – so there is nothing new here. The current problem is just a little more widespread and a bit closer to home. Banks in emerging economies have largely avoided these problems and most emerging economies do not have large government debts or unfunded pension liabilities. 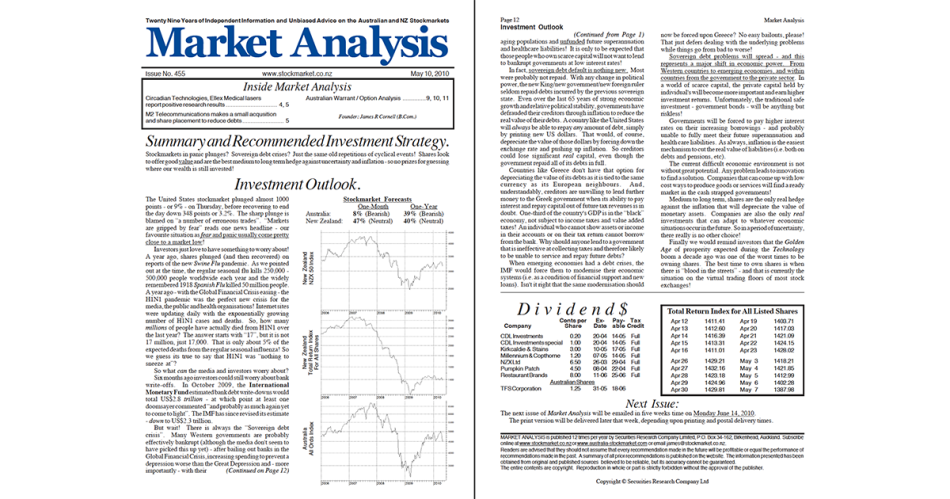 So, is it safe to venture out onto world stockmarkets? Perhaps we should ask: Is it ever safe..? There are two important answers to that question:

Firstly, if you have some money or can save some money – and you want to build your investment wealth – then you have no choice! You won’t get rich stuffing cash under your mattress or lending it at low interest rates – where its value will be eroded by income taxes and inflation. And are fixed interest investments with Finance Companies, Banks or Governments safe? If you want to build your wealth then you need to invest in shares. Shares are also the only real hedge against future economic uncertainty and technological or political change. Companies are best suited to adapt to the ever changing environment.

Of course, you need to avoid stupid mistakes: You need to diversify over many companies because some will fail along the way! That has always been the case… and always will be. You also need to avoid leverage or margin or using borrowed money which makes you vulnerable and can result in forced sales in a crisis when prices are at their lowest.

So you will need to work out a medium term strategy for saving and investing and making your first $100,000 – knowing that you may temporarily lose $30,000 of that in some future crisis (GFC 10.0?). Then turn that remaining $70,000 into your first $1,000,000 – and expect to lose perhaps $300,000 in another unexpected stockmarket crisis. Stick at this long enough and you might make $10 million – which means you will be wealthy enough to perhaps lose $3 million in some future crisis! Of course, you can avoid all of those losses by remaining poor… but you will be better off having a share portfolio large enough to fluctuate in value by millions of dollars!

Secondly, forecasting the future of share prices is particularly difficult. In fact, a major financial crisis, when everyone is pessimistic and the outlook is the darkest is usually the very best time to be buying shares!!! So if you buy shares in periods of economic prosperity and growth, and sell when there is talk of crisis and depression, then you will almost certainly be buying near the market high and selling near the market low! The media is the worst forecaster of the economy and stockmarket.

A little bit of common sense can help too! You are not buying an economy but individual shares, so have a look at whether those individual shares offer investment value. During the Technology boom, the shares of many unprofitable companies sold at 10 or 100 times revenues. Frankly, common sense should have told people that even if the economy grew strongly and these companies were extremely successful, shares bought at 10 or 100 times revenues would probably never produce a reasonable return on their initial cost. In fact, few of those companies were even moderately successful. Most failed! (Of course, those of us who expressed such views at the time were ridiculed for “not understanding internet economics” – while perhaps understanding it only too well!)

Today we would suggest that investors look at a company like Integrated Research (and others). At 39½ cents this debt-free company’s shares trade on a Price/Earnings ratio of 8½ and offer a Dividend Yield of 10.1%. The company has cash in the bank of $10.1 million (6.0 cents per share) and good growth potential for its software. Whatever might happen to the global economy or Sovereign debt or the US dollar, doesn’t that seem like a good share in which to invest a small part of your wealth?

Why lend your money to a government with negative cashflows (i.e. operating at a deficit) and probably a negative net worth (i.e. if future pension liabilities are included)? It is no surprise that there is a Sovereign debt crisis! Surely it will be better to invest in a range of profitable companies like Integrated Research which have strong cashflows from their business, intellectual property and cash in the bank?

This information is not a recommendation nor a statement of opinion. You should consult an independent financial adviser before making any decisions with respect to your shares in relation to the information that is presented in this article.