A number of weeks ago we debuted the first Sharesight20 weekly trading snapshots, a weekly update of the top 20 shares traded by the Sharesight userbase on the ASX (#Sharesight20ASX) and the NZX (#Sharesight20NZX) over the past 7 days.

Today we launch the Sharesight20 monthly trading snapshot where we look at the top 20 trades on both the ASX and NZX markets among the Sharesight userbase during the current month and dig a little deeper into the news behind these movements. 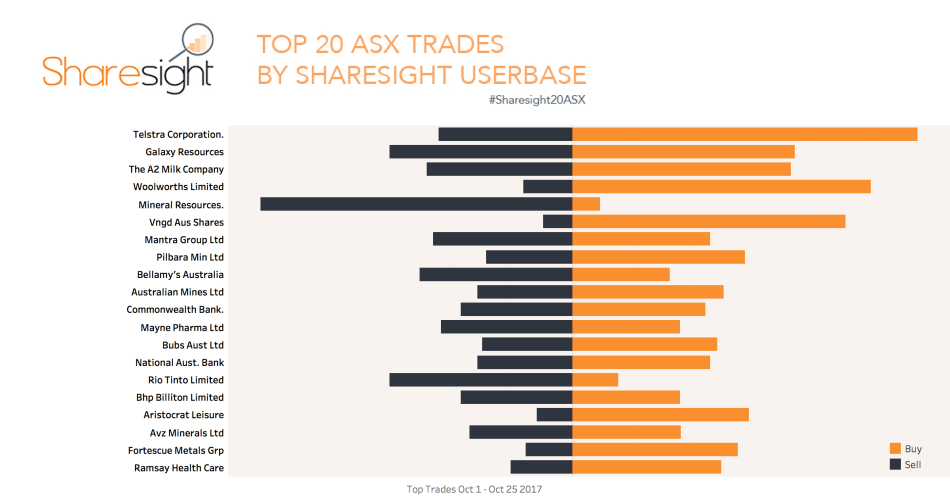 Among the top 20 transactions by number of trades on the ASX during October (1st to 25th), we saw buy interest in Telstra Corporation (ASX: TLS), Woolworths Limited (ASX: WOW), Vanguard’s Australian Shares Index ETF (ASX: VAS) and Aristocrat Leisure Limited (ASX: ALL). Let’s dive into the news surrounding these movements: On the New Zealand stock exchange in October we saw a bias towards buy trades in the Sharesight20NZX with Auckland International Airport Limited (NZE: AIA), Fletcher Building (NZE: FBU) and the NZ Top 50 index ETF (NZE: FNZ) topping the buys during the period.

Want the weekly Sharesight20 ASX and NZX weekly trading snapshots every Monday? Join the Sharesight community now to make sure don’t miss out on a snapshot.

You’ll also find the latest Sharesight ASX and NZX trading snapshot on Twitter using the #Sharesight20ASX and #Sharesight20NZX hashtags, or by ‘liking’ Sharesight on Facebook, LinkedIn, or Google+.