Disclaimer: This article is for informational purposes only and does not constitute a product recommendation, or taxation or financial advice and should not be relied upon as such. Please consult with your financial adviser or accountant to obtain the correct advice for your situation.

Each month, Sharesight highlights the top 20 stocks traded by its users in a range of global markets, and the market-moving news behind them. This article details the top 20 buy and sell trades made by SMSFs in October 2020. To find out the news behind these stocks, keep reading.

The top trades by SMSFs in October 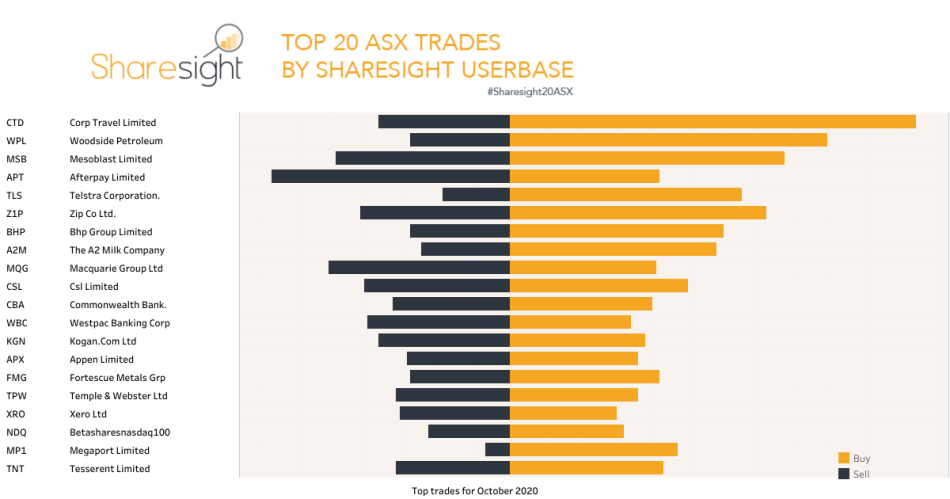 Corp Travel (ASX: CTD) was the most-bought stock by SMSFs in October, after a mixed month for the company. Corp Travel’s share price saw a significant drop in October following the release of its Q1 2021 results, which revealed an average monthly revenue of $9.6 million and underlying EBITDA loss of $2.4 million. The company also completed its capital raise of $375 million, a portion of which was spent on the acquisition of US business Travel and Transport.

Woodside Petroleum (ASX: WPL) saw its share price hit a 16-year low in October after reporting a 43% drop in its Q3 2020 revenue, which was attributed to Covid-induced oil price cuts. The company also announced its intention to cut 300 direct staff jobs, which represents just under 8% of its workforce.

Mesoblast (ASX: MSB) experienced a 40% plunge in its share price throughout October following the FDA’s rejection of its drug, remestemcel-L. Things could be looking up for Mesoblast however, with the continued enrolment of Covid-19 patients in a phase 3 trial of its stem cell treatment, and another meeting with the FDA in November.

Afterpay (ASX: APT) was the most-sold stock by SMSFs in October. The company’s share price reached a record high after announcing a deal with Westpac to provide Afterpay-branded digital banking services using Westpac’s technology. This led analysts to question whether Afterpay is trying to move into the growing Australian neobanking industry, and whether this will turn Westpac’s existing Millennial customer base onto Afterpay.

Telstra (ASX: TLS) is another company that experienced a share price drop in October, hitting a multi-year low of $2.68. This came after the announcement of an executive shake-up which will see the departure of Telstra group executive Michael Ebeid after two years in the role. The company also launched its 5G home internet plan to compete with the NBN, and has tentatively agreed to maintain its 16 cent dividend payment.

Zip Co (ASX: Z1P) had a busy month in October, announcing an integration with Visa that will vastly expand the coverage of Zip Pay. The company also acquired fashion search engine The Urge, and announced the doubling of its transaction volumes and revenue compared to the previous year.

BHP (ASX: BHP) made headlines in October after abandoning a $3.5 billion expansion plan for South Australia’s Olympic Dam. This led to a steep drop in the company’s share price, which reached a 5-month low of $33.78 at the end of October. BHP also confirmed that Chinese orders of coal are being deferred, following reports that some Chinese industries have been forbidden from buying Australian coal, and that ports are no longer accepting shipments.

a2 Milk (ASX: A2M) is another company that has been impacted by decreased revenue from China. The share price struggled throughout October, after a2 revealed that its Q1 2021 results are expected to miss the mark due to disruptions to the daigou arm of the business. The company has assured that it continues to see “strong underlying consumer demand” from China, however.

Join over 150,000 global investors and start tracking your investments with Sharesight’s portfolio tracking tool, designed to meet the needs of SMSF trustees and self-directed investors with powerful performance reporting and Australian tax features.

Keep track of your SMSF with Sharesight

Join over 150,000 investors tracking their investment performance (and tax) with Sharesight.

Built for the needs of SMSF trustees, with Sharesight you can: