SMSFs make up roughly 35% of the portfolios tracked in Sharesight by Australian investors. Looking at this data, we’re able to generate insights into the investment trends of trustees building their self-managed superannuation funds.

Let’s take a look at the 20 most traded shares within those SMSF portfolios, and how they performed in 2018. 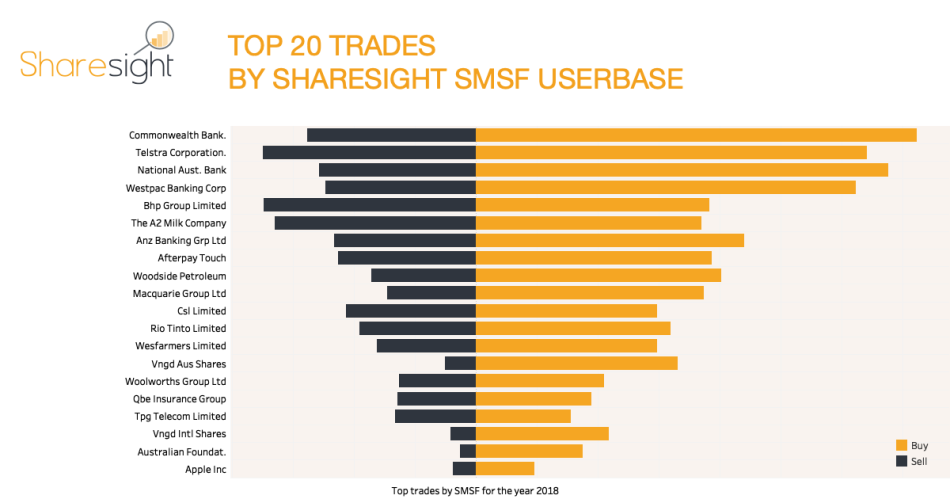 Some assumptions in the calculation of returns below:

Performance of the 20 shares most traded by SMSFs in 2018

Apple (NASDAQ.AAPL) was the only international share in the top 20 most traded among these SMSFs. As shown in the Sharesight Performance Report, a major component of the return came from currency changes in AUD relative to the USD.

Role of ETFs in diversification

ASX-listed ETFs VGS and VAS were among the top 20 traded ASX shares among these SMSFs in 2018. According to the Vanguard website, ASX.VGS ETF provides exposure to many of the world’s largest companies listed in major developed countries. It offers low-cost access to a broadly diversified range of securities that allows investors to participate in the long-term growth potential of international economies outside Australia.

Locally, ASX.VAS, the Vanguard Australian Shares Index ETF, seeks to track the return of the S&P/ASX 300 Index before taking into account fees, expenses and tax.

As can be seen from the top 20 traded shares by SMSFs using Sharesight in 2018, SMSF trustees favour investments that generate high income yield via dividends. However, ETFs such as ASX.VGS and ASX.VAS have found their way into the top 20 most traded shares.

SMSF Trustees are required to document the investment strategy of their SMSF each year. Typically, this is a pretty bland and generic document that is prepared by an accountant and simply highlights the asset allocation (e.g. the split between equities, fixed interest, international shares).

Sharesight’s Custom Groups feature allows you to organise your holdings according to this asset allocation and investment strategy, easing your SMSF admin burden and providing valuable insights throughout the year.

With over $6.1B USD worth of investments actively tracked by investors with Sharesight, it’s time you sign up for an account and start tracking your SMSF today!

Important Disclaimer: The opinions expressed here are the author’s alone and should not be taken as advice. Sharesight does not provide financial advice.