At Sharesight, numbers are very important to us. From the share price data we source from more than 25 stock exchanges globally to the importance we put on accurately calculating your investment performance, they are at the core of everything we do.

Over the last 12 months the numbers behind Sharesight have increased considerably. Sharesight users globally continue to surge after Google turned its back on DIY investors by crippling Google Finance last year, and they realised that Yahoo Finance is even worse.

This growth has pushed the numbers behind Sharesight to new records – here are the latest ones to be broken: 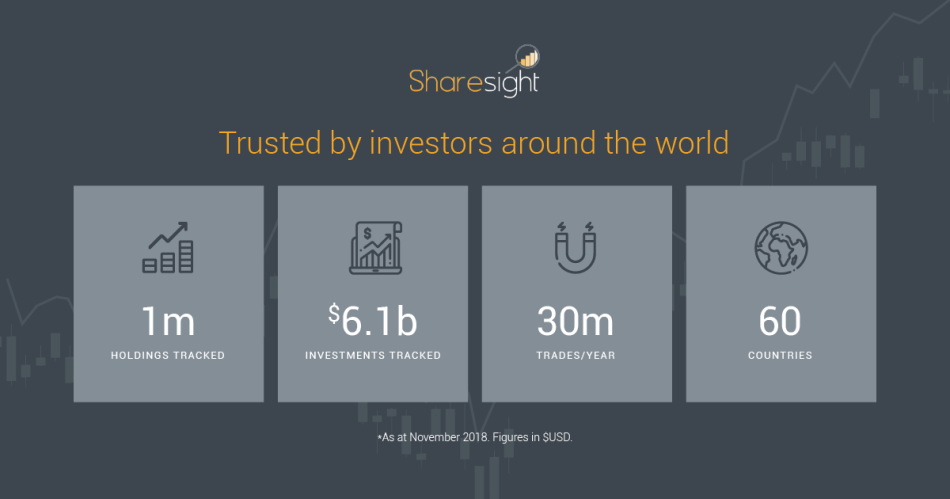 Sharesight users are tracking over a million holdings

Sharesight is currently tracking over a million individual holdings ( 1,079,664 to be precise), with the average Sharesight Investor plan user tracking 64 different investment holdings, and Expert plan users tracking an average of 114.

Sharesight currently tracks $6.1B (USD) worth of investments

If we count only Sharesight users who have been active in the last 30 days (and exclude portfolios larger than $10 million to remove outliers), Sharesight is currently tracking $US6.1 Billion in investments. This is a significant boost from the $1.9 Billion Sharesight tracked only one year ago.

A new trade is added to Sharesight nearly every second

Whether it be via Sharesight’s API, or imported with a CSV file, brokers’ Trade Confirmation Emails, or manually added, Sharesight users currently track a new trade nearly every second. That equates to over 30 million trades recorded in a single year!

At the individual portfolio level, across all plans, users have recorded 87 trades on average.

Investors in over 60 countries track their investments with Sharesight

While the majority of Sharesight’s users are in Australia and New Zealand, investors from over 60 countries around the globe currently use Sharesight to track their investments. And as we grow globally, we’ll expand our region-specific features. One example is the launch of Sharesight in Canada, which brought our Canadian Capital Gains Tax report, support for RRSP, RRIF and TFSA portfolios, as well as support for a growing list of Canadian brokers.