With Sharesight being founded 10 year ago this month, I sat down with Sharesight co-founder and CTO Scott Ryburn to learn about the history of Sharesight and Scott’s fintech startup journey over the last decade. 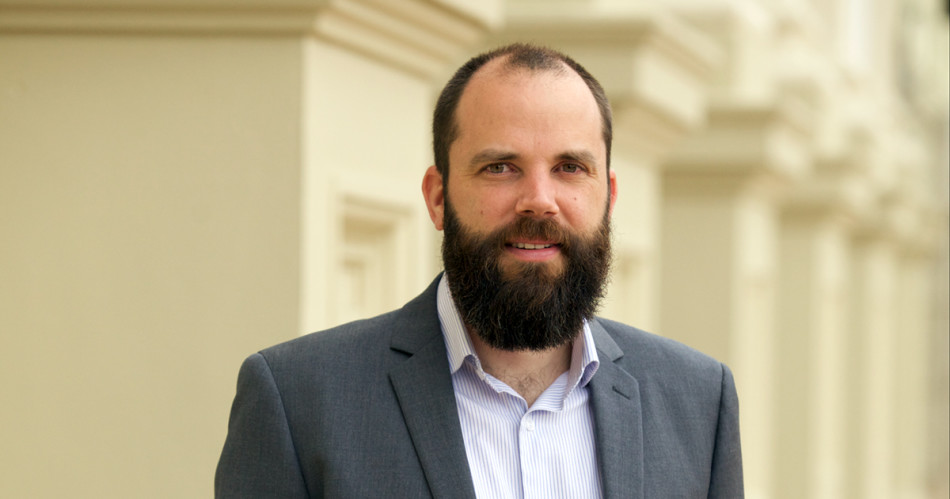 You started Sharesight with your father, after years of tinkering with complex spreadsheets to help him manage his share portfolio. How did you decide to build a SaaS product to do this instead?

We started looking for a better solution to the portfolio tracking spreadsheets we were using to track our portfolio. However despite a lot of searching we couldn’t really find anything better.

There seemed to be a real gap between the very basic reporting tools that online brokers were offering, and desktop share portfolio software that seemed really antiquated, expensive and overly complex. Plus a lot of the more sophisticated products that we found were focused on compliance and lacked decent performance reporting.

I think we discussed the idea of developing our own product on-and-off for a few years (although in a very non-serious way initially) before we ultimately convinced ourselves to give it a shot. From the beginning Sharesight was conceived as an online product. Although software-as-a-service (SaaS) was perhaps a bit of a new trend in those days, it made a lot of sense for something like Sharesight. 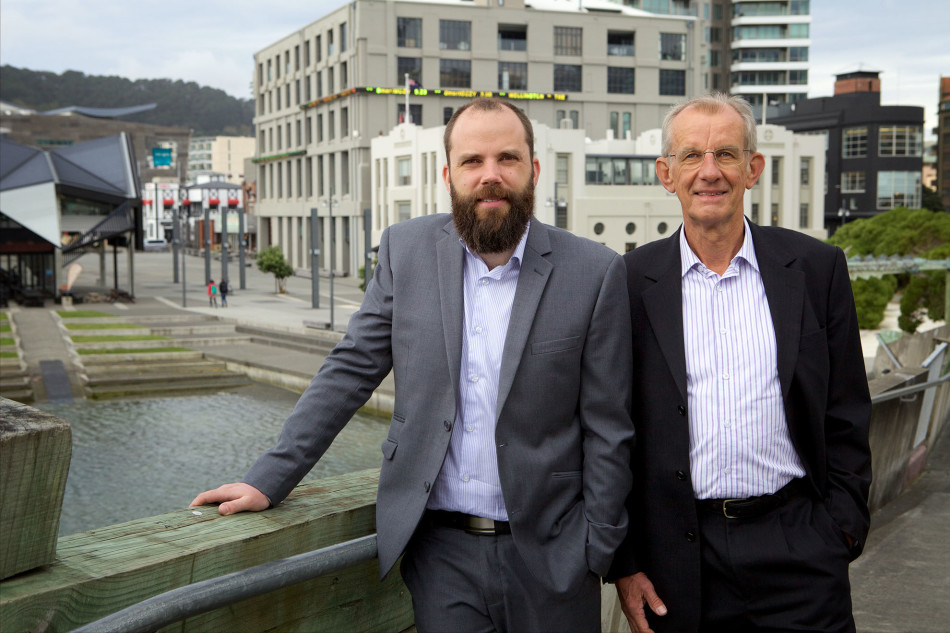 Scott with his father and Sharesight co-founder Tony Ryburn outside the NZX in Wellington, NZ

You built the first version of Sharesight with the team at Abletech (who are also early Sharesight investors). How did that relationship come about and how has the Sharesight developer team grown since then?

With no programming experience and a limited budget, our first challenge was to find software developers. We contracted a designer to create mockups to illustrate our vision and then basically pitched our idea to as many developers as we could find. We received estimates that ranged anywhere from $50k to $500k and quickly realised that outsourcing the development was going to be a risky proposition!

We met the Abletech guys (Nigel Ramsay and Marcus Baguley) through a contact of our designer. As share investors themselves, they understood the problems we were trying to solve and were keen to get involved on an equity basis. This was the perfect solution for us and we formed the company soon after. Today we have 8 full-time staff on the Sharesight development team in Wellington. 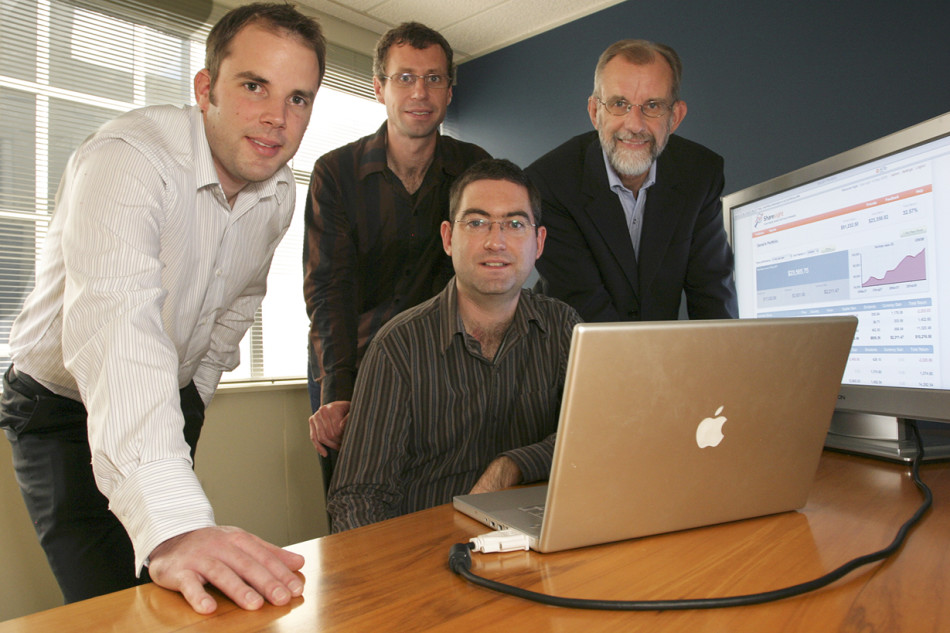 Scott (left) with Abletech’s Nigel Ramsay and Marcus Baguley and Scott’s father Tony with an early version of Sharesight.

Sharesight integrated with Xero in 2009 using the very first version of the Xero API. What drove the decision to integrate with Xero and how has the Xero API integration changed over the years?

One of our early features was the ability to share your portfolio, so as a result of this many accountants were introduced to Sharesight through their clients. Xero started around the same time as Sharesight and they were doing a great job of explaining the benefits of online software. So demand for an API connection initially came from accountants who were enthusiastic Xero users with first-hand experience of the benefits of the cloud. It helped that the Xero office was just down the road from us here in Wellington and we knew some of their key people even from pre-Xero days.

Over the years we have continued to develop Sharesight’s Xero integration to support multi-currency, DRPs/journal entries, background sync, cash accounts, etc. We also became the first Xero Add-on partner to resell the Xero Cashbook product directly to our subscribers. Sharesight and Xero work hand-in-hand and complement each other perfectly. 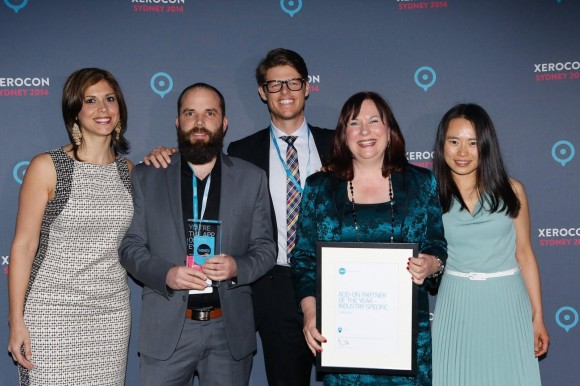 Scott and other members of the Sharesight team, accepting the award for Xero Add-On Partner of the Year 2014.

Sharesight released its first API in 2010. How did you go about building it?

The initial requirements for the Sharesight API came from Direct Broking, who were looking to integrate with us to allow their customers to automatically sync trading information to Sharesight. We also leveraged the knowledge we gained from connecting Sharesight to Xero using the Xero API. Ultimately we developed a RESTful API using the OAuth authentication protocol which is still the common template for most modern web based APIs.

Direct Broking was our first broker API partner (what we refer to as Sharesight Connect), and we now have similar integrations with CMC Markets Stockbrocking, Bendigo Invest Direct, Bank of Queensland, and eBroking/eSuperfund.

Sharesight’s performance calculations are run in real-time. How have you managed scaling over the years?

Sharesight’s real-time performance calculations are quite CPU and memory intensive in comparison to most web apps and also involve a lot of database queries behind the scenes. Scalability has involved a combination of optimisations to the code, increased server capacity, and taking advantage of new technology. We moved our entire server infrastructure to AWS (Amazon Web Services) a couple of years ago which has been great and allowed us to take advantage of a number of their leading-edge technologies. For example we recently moved Sharesight to the Amazon Aurora database service, which boasts 5X the throughput of our previous standard MySQL database.

Sharesight customers sometimes ask us where their data is held and how secure is it. How do you protect customer data and how has it changed over time?

Sharesight customers trust us to keep their personal financial records secure and it’s a responsibility that we take very seriously. Security is top of mind with every new feature or code change and we pay close attention to ensure that our servers are up to date with the latest security updates. We’re always on the lookout for ways to enhance security. For example, we recently introduced database encryption and 2FA (two-factor authentication) via Google sign-in. A full overview of Sharesight’s security practices is available here.

What do you believe has been the most important change to the Sharesight user interface in the last 10 years?

We’ve generally developed the interface iteratively over time, favouring small incremental changes. Certainly the biggest change was switching to the tab-based navigation that’s currently in place, which also included an updated colour theme. We followed this up by introducing overlays for editing trades and dividends which also made a big difference to the speed and ease of navigation. More recently we’ve turned our efforts to improving the Sharesight Mobile App and overall web experience.

The Sharesight Mobile App was released in 2016. How did you build the app to support multiple mobile platforms?

We built our mobile app as a web app initially using the Ember.js javascript framework and then used the Apache Cordova framework to wrap this into a mobile app for iOS and Android. The advantage of this approach was that our developers could use familiar technology to create the mobile app and we don’t have to maintain a separate codebase for each platform. Sharesight tracks tens of thousands of portfolios all over the world. Do you have a particular investment philosophy?

For me it’s pretty simple, I invest in companies that I like, understand, and operate in an industry with long-term potential. Suffice to say my largest investment is in Sharesight!

What is it about New Zealand that makes for such a hotbed for technology?

I think New Zealanders really cherish innovation and as a nation we tend to be early adopters of technology. There’s also some good government support available for startups which really helps (Sharesight received early stage seed capital from the NZ Venture Investment Fund). Additionally the NZ lifestyle and visa requirements that are not overly restrictive allow us to attract overseas talent that is crucial to the continued growth of the tech sector. Here in Wellington, companies like Trade Me and Xero have shown us what’s possible and inspired many young startups and entrepreneurs.

What do you wish you knew then that you know now? What lesson would you share with an up-and-coming fintech founder/CTO?

I think the most important thing is to find the people with the skills and experience that you lack and find a way to get them on board as early as you can. There’s no shortage of advice on offer if you seek it out, but always remember that what worked for someone else may not work for you. At the end of the day, you have to trust your instincts.

Thanks for your time Scott. I look forward to getting an update from you after the next 10 years of Sharesight!